The Language of Yoga: Bandhas 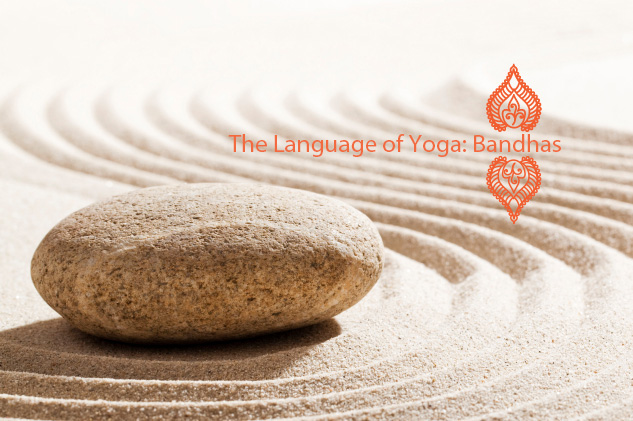 The term “bandha” in yoga has several different meanings, some more philosophical and others more literal. The word itself translates as “bind,” “bond” or “bondage,” which can obviously signify a lot of different things, positive and negative, mental and physical. Nikki Villela, of Kula Yoga in New York City, says that “the more literal translation of bandha is bondage or lock. However, at Kula we like to refer to them as valves, as they regulate the flow of pranic energy as a switch would control the flow of electric current.” Sometimes called the “yogic locks,” bandhas are different ways of locking or contracting the body, and are said to direct the flow of energy, or prevent it from escaping. Other connotations of the word have more to do with the human condition, and yoga’s powerful capacity to help us understand and navigate it.

There are three main bandahs: Jalandhara, Uddiyana, and Mula. “Jalandhara means a netting or mesh,” says Villela. “When employing Jalandhara bandha the chin drops towards the notch between the collar bones as the side waist of the neck pulls back.” The chin can rest gently on the sternum, if possible, as the sternum reaches up towards it. Jalandhara bandha is generally done along with breathing practices, and, says Villela, is thought to regulate blood flow and energy from the constriction of the structures and vessels of the neck.

Uddiyana, known as the abdominal lock, actually translates as “flying up,” says Villela, and is thought to help energy rise upwards. “When employing uddiyana bandha, the navel draws towards the spine and the abdominal organs are lifted towards the heart (and away from the pull and effect of gravity).” Uddiyana bandha is done after exhaling, and while doing a “mock inhalation” – that is, you open your rib cage as if you were inhaling while the abdominal muscles are drawn strongly towards the spine. This bandha is also said to increase “gastric fire,” and help digestion.

The last bandha is the Mula bandha, known as the “root bandha.” Says Villela, “This bandha corresponds to working the pelvic floor. It can be helpful to think of the pelvic floor as a second diaphragm or a parachute that contracts and lift up.” Mula bandha is thought to redirect the flow of energy upwards towards the heart, and prevent energy from leaking out through the base of the spine or pelvic floor. ”Awareness of mula bandha helps to organize the organic body and give it support from the bottom up, much like working the feet helps to organize the entire body above them,” says Villela.

Maha Bandha, or “the great bandha,” is when all three bandhas are done together, begun one at a time and then released in the same order. “For me personally,” says Vilella, “I like to think of the bandhas as a way to assist in one of the yogi’s primary goals: how to channel and then conserve energy. How do we work more intelligently so that less effort is exuded and less energy is lost? How can we conserve energy? How can we get our energy, which is said to lie dormant at the base of the spine, to percolate so that we can channel it and use it more efficiently? The bandhas.”

As mentioned, bandha also has other meanings. Its translation as “bondage” can also refer to our original state – the state of “unenlightenment,” which yoga seeks to help us undo. In other words, the “bondage” refers to our own spiritual ignorance or unknowingness, and it’s yoga that helps us peel back the layers to reveal a more enlightened self.

Another meaning from classical yoga is that it signifies the “correlation” or bridge/bond between our two selves, the ego self (the finite) and the transcendental self (the infinite). In this way, it is related to the term samyoga, which suggests that this “correlation” between the two selves is actually the root of all suffering, or dukkha. Through study and practice, it’s possible to break the “bond” – so in some ways, bandha is not only the source of suffering, but it’s also the key to enlightenment.

Finally, as Patanjali says in the Yoga Sutras, the sixth limb of yoga, dharana (concentration), is about bandha of another kind. With dharana, the goal is to focus on something visual (e.g., a flower) or auditory (a mantra). Since the mind naturally wanders from the object of attention, the task is to bring our attention back to the object, again and again. So here, bandha represents the bond that forms (after a lot of practice!) between the mind and its object of focus.

So, bandha can have a lot of different connotations. In yoga class, it typically refers to the more advanced practice of the yogic locks. Philosophically, it has different meanings, which, in various ways, all conjure up the larger aims of yoga: To break down the bonds that hold us back, to connect with things outside ourselves, and to move from a limited form of awareness to a more encompassing one. Removing the bonds that limit us and creating new ones within and outside ourselves is, after all, what yoga is all about.