The Language of Yoga: Tantra 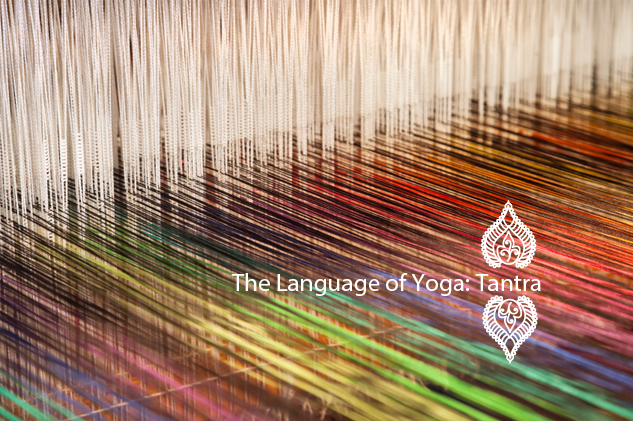 One thing’s for sure about tantra: Its history is as complicated as its philosophy. Though there’s a lot of beauty to it, the tradition has picked up some not-so-positive connotations along the way. Many people equate “sex” or “weird sexual practice” with the word. But, says Coby Kozlowski, a teacher at Kripalu Center for Yoga and Life, but this isn’t totally accurate, as there are lots of different philosophies within the tradition. “The word itself has a vast history and can be thought of in many ways,” she says. “So often when we hear the word tantra, we think ‘sex.’ But tantra is a much more diverse and rich part of the evolution of yoga and is both a school of thought and body of practices. Within each school of thought there are diverse belief systems and today it stands as a path for many spiritual seekers.”

The word tantra itself is translated as to weave, or loom, since the root “‘tan’ means to ‘stretch or expand,’” says Kozlowski. The suffix “tra” generally translates as tool or instrument, making tantra an instrument by which to weave. “We are given the gift of embodiment, and have the opportunity to dance with all that life has to offer and weave into the infinite tapestry—a constant and never ending loom, which is always expanding into more.”

So why do we think of tantra as being so much about sex? Danny Arguetty, also a Kripalu teacher and student of Douglas Brooks, points out that tantra incorporates many different philosophies which diverged into three separate approaches over time. One of the arms became increasingly sexual in nature, but tantra as a whole got stuck with this connotation. “The Tantra involves a vast array of thoughts, philosophies, and schools which are often thought of as representing either a right handed, left handed, or centric approach,” says Arguetty. “The left handed practices used sexual practices of varying degrees – from benign to sadistic – and are the reason the Tantra still has negative associations in India.”

But the associations just deepened as tantra moved to the U.S. “As yoga migrated to the West,” he says, “small groups of practitioners discovered the approach of left handed schools in turning sexual intercourse into a practice of raising energy, honoring pleasure by delaying and then having a more powerful orgasm, and feeling the dance of the feminine and masculine energies (Shiva and Shakti). With the help of these teachings and the Kama Sutras, neotantra (sometimes called California Tantra) was born, popularized, and created the association of Tantra as sexual practices. While many other Tantric schools do not deny physical intimacy as a conduit for rich exploration, they are also invested in infusing passion, increased energy, and pleasure into broader facets of life.”

So that’s how it got its sexual and, in some circles, its negative connotations. But as both teachers point out, there’s a much richer way to think about tantra and incorporate the idea into our lives. Kozlowski says, “if you keep the more original definition in mind, tantra is about building upon and integrating past experience – good and bad – into the self. Tantra Yoga then becomes an opportunity to surf the different flavors of life such as grief, sadness, sorrow, passion, lightness, peace and recognize that tantra is not about escaping or disassociating from life but rather a rich relationship with all the different flavors that life has to offer.”

How often have terrible situations in life – a job loss, a divorce, or some other form of rejection – later turned out to be turning points for something better? Keeping in mind the fact that the really painful things that happen to us are often, eventually, ways of inviting in better things is important. Of course, sometimes a bad situation is just a bad situation, and not always a door to something great. But even these times can be opportunities to learn to at least sit with the lousy stuff, and know that it too shall pass – and we’ll be the better for it. Oftentimes it seems like it’s the kindest, most soulful, and most giving people who have been through the most difficult situations in their lives. And that seems to be more than just coincidence.

“Each moment becomes an opportunity to find a deeper and more intimate connection and an opportunity to delve into the intelligence and luminosity around us and in us,” says Kozlowski. “Rather than trying to reach a peak experience of enlightenment, we can both weave and bind to this moment and feel the evolutionary impulse of desire that expands us into the more.”

What has been your experience with tantra, in any of its forms? Please comment below.