The Language of Yoga: Jai Ma 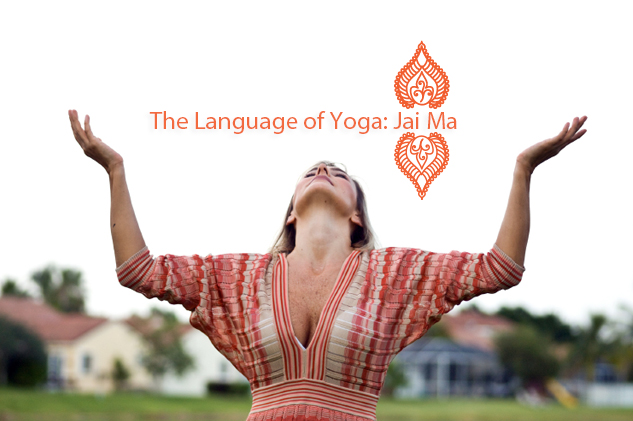 You may have heard the term “Jai Ma” at some point in your practice, either used in mantra, or perhaps just “jai” alone more casually. It’s a lovely and simple phrase that calls to mind the creative forces in the universe – and more specifically, our acknowledgement and gratitude to them. Even more interesting, it calls to mind the feminine forces, which not only give birth to new things, but can also effect change in the old ones.

“’Jai’ is the modern north Indian pronunciation of the Sanskrit ‘jaya,’” says William Mahony, PhD, Charles A. Dana Professor of Religion and Chair of the Religion Department at Davidson College, “the latter meaning: victory to, hail, praise to, or admiration/adoration/respect for. ‘Ma’ is a word for ‘mother’ and in this context refers to the universal Goddess … powerful, protective, creative, effective. So, ‘jai ma’ could be translated as ‘great gratitude to the divine Mother. May her power be victorious over all obstacles.’”

The maternal or female energy is one of the earliest objects of contemplation and worship. ‘Ma’ itself refers to the universal creative force that’s represented in the powerful feminine deity Shakti. Says Judith Hanson Lasater, PhD, PT, “The Divine Mother represents Shakti, or cosmic energy. I would use this phrase to say, in effect: ‘May the Divine rule in the form of the energy and love of the Mother, and may that energy bring us all good things.’

Shakti is the counterpart of Shiva, who represents the masculine, “destructive” force in the universe, and who ultimately makes room for the creation of new things. Shakti, on the other hand, is that creative (feminine) power that fills the void with new energy and matter, and is a key agent of change. So, says Lasater, the phrase “Jai ma is another way of saluting the Divine Feminine in our world. We need it!”

“Jai ma” is often used in chanting or mantra, says Lasater, but “jai” by itself can also be used in everyday communication. For instance, Lasater herself often signs her Facebook posts with “Jai!” as a valediction. “Jai itself is an exclamation meaning ‘victory to the good’ or ‘victory to God.’”

So try including a “jai” in your communications (and see if people ask you what it means). Or if you’re searching for a simple mantra that holds a lot of significance, you might try “jai ma.” Repeating the phrase either aloud or silently, while holding its meaning in your mind, may be an effective way to reboot your brain and get re-centered. And this attention-shifting is important whether you’re having a rough day, or whether you just want to express your gratitude to the universe, and to the power and importance of change.