The Language of Yoga: Chitta Vritti 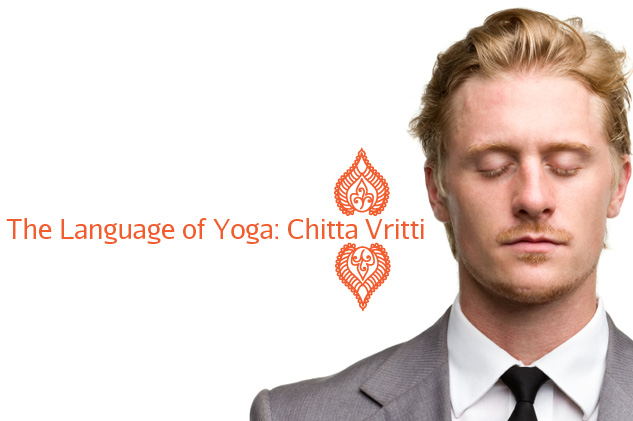 Chitta vritti is a term that practically everybody is familiar with – if not in theory, definitely in practice. Its more colloquial translation is usually “mind chatter,” or “monkey mind,” which as you might guess, refers to the tendency of our minds to flit about from one thought to the next. Usually, mind chatter involves a string of worry thoughts, often about the self, whether they’re warranted or not. The amazing thing is that chitta vritti is not at all new. We think of our lives as more complicated and distracting than ever before, and they may be, but people have had trouble reining in their minds for ages. And to combat the unpleasantness of mind chatter, one of the central aims of yoga is to “tame” the monkey mind, so we can get to what’s behind it – a quieter, calmer kind of consciousness.

Chitta, or citta, comes from the root “cit,” to be conscious, and “vritti” generally translates “whirl” or “fluctuation” in any area. But when it comes to chitta vritti as a yogic term, the translation is usually something along the lines of “mind fluctuations,” “mind chatter,” or “monkey mind.” The big goal of yoga is to quiet these fluctuations, which can cause us so much stress and pain. In fact Patanjali, author of the Yoga Sutras, wrote that, “Yoga is the restriction of the fluctuations in consciousness.” Training in yoga in the larger sense – namely, concentration, attention, and meditation – can help stop these fluctuations and quiet the chatter, so that you can get in touch with a truer sense of self, and a more peaceful, watchful sort of awareness.

What’s also interesting is that meditation has been shown to work not only through the millennia that humans have been practicing it, but how it works has also been observed through brain imaging studies over just the last few years. Clara Moisello, PhD, a neuroscience researcher at the City College of New York, points out that “Studies on meditation and mindfulness have reported a number of positive effects in long term meditators, ranging from structural changes (increase in cortical thickness in frontal areas, increased gray matter density, etc.) to functional changes” – that is, changes in how the brain actually functions.

For example, meditation has been shown to reduce activity in the areas of the brain that appear to be responsible for mind-wandering, which is closely related to mind chatter. The default mode network (DMN) is a brain network that’s active when we’re not thinking about anything in particular, but when our minds are just sort of drifting from thought to thought. As Moisello says, these regions are also responsible for “self-referential processing” – that is, all the “me” thoughts we have throughout the day, which don’t really get us anywhere, and which can feel incessant and intrusive. The fact that experienced meditators – and, amazingly, people just starting out with meditation training – can reduce activity in this network at will, and quiet their own brains on cue, is exactly the overarching goal of yoga.

(Here’s a beautiful image showing the difference between mind-wandering and being focused on the present moment.)

And as Sri Swami Satchidananda says in his translation of the Sutras, it’s not easy in the beginning – retraining your brain is a practice that takes a lot of repetition. So when you’re just starting out with meditation or mindfulness training, it’s important to remember that it’s not the act of sitting quietly that’s the practice – it’s the act of bringing your mind back to concentration – again and again and again. And just like a muscle, it’s a skill that will strengthen over time. “This very practice itself is called concentration,” he says. “[T]he mind running, your brining it back; its running, your brining it back. You are taming a monkey. Once it’s tamed, it will just listen to you. You will be able to say, ‘Okay, sit there quietly.’ And it will.”