The Language of Yoga: Namaste 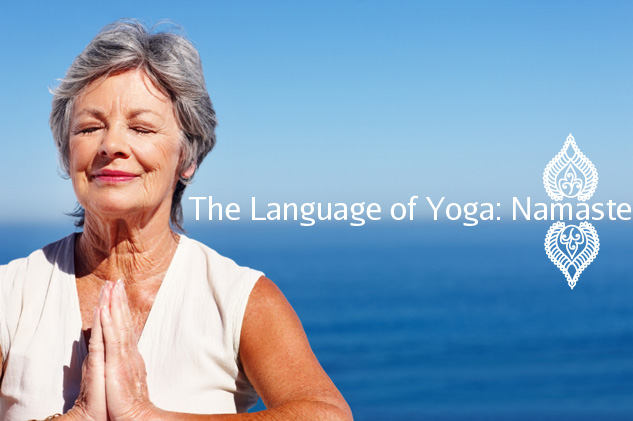 To kick off a new series that will cover some of the more common terms we hear in our yoga practices, it seems fitting, if a little backwards, to begin with the term that most people hear at the end of every yoga class: Namaste. It’s actually become so much a part of everyday language, depending on whom you hang out with, that it’s not so uncommon to hear Namaste in everyday conversation or even to see it in an email signature or on a business card. But the term has a long and lovely history, and what’s especially important about the term is that when you look at its derivation, the three short syllables manage to encompass everything that yoga is about.

Rolf Sovik, PsyD, the president and spiritual director of the Himalayan Institute, says that breaking down “namaste” into its parts yields a couple of different meanings, which is fairly common with Sanskrit words. “’Namaste’ is a word composed by joining two words,” he says, which are “namas and te, meaning ‘obeisance’ and ‘to you,’ respectively. The first of these two words, namas, originates from the verb root nam (pronounced “num”) which means to bow, to submit one’s self. This is a matter of heart and it implies a relationship characterized by humility and reverence.” He adds that Namas or Namah is often heard in mantras, where it encapsulates a feeling of devotion, and as such, “it helps a meditator acquire the sense of trustful surrender that is so essential to inner life.”

The final syllable, “te,” Sovik says, translates as the pronoun “you,” but because of how the language is set up, the preposition “to you” is actually more accurate. Many mantras also bring this expression of deference to mind. “For example,” says Sovik, “in the familiar mantra ‘namah shivaya’ the sound shivaya ends with a dative case ending ‘aya’ meaning ‘to shiva.’ ‘I bow to the Infinite.’” So one way of thinking about the full translation of Namaste, says Sovik, is, beautifully, “I bow to you” or “I surrender to you.”

The other way of conceptualizing Namaste, which is somewhat less common but also worth mentioning, is that you can also divide “namah” into “na” and “mah.” Sovik says, “the word ‘na’ has the meaning ‘not.’ ‘Mah’ means ‘me, or mine.’ In this derivation, the word namah (or namas) takes on an even more fundamental meaning—unselfishness.” This way of breaking it down is not at all at odds with the more common meaning mentioned above, and it is also extremely relevant, since yoga is so much about acknowledging the lack of separation between the self and the other.

Sovik agrees that part of the beauty of Namaste’s meaning is that it “is suggestive of the most essential quality of spiritual life, love for the Infinite embodied in the world and people around us.” Even the physical gesture that often accompanies it underscores its intention, he points out. “It is usually uttered with palms joined at the heart and head bowed – a respectful union of action, devotion, and contemplation. As for its meaning, ‘I bow to the Divinity in you’ captures its essence.”