The Language of Yoga: Duhkha 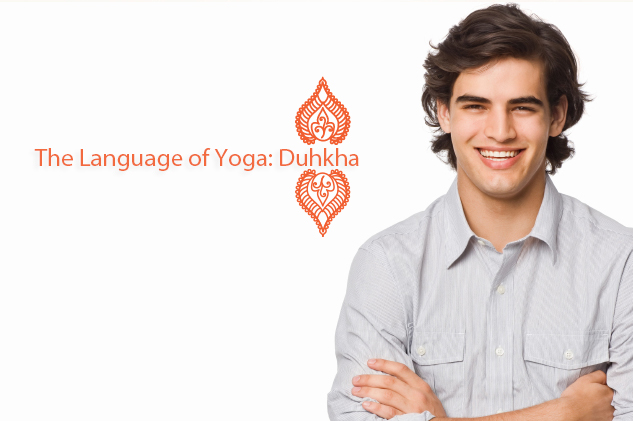 The beautiful part of the term “duhkha” is that, like many other yogic concepts, it’s so universal. We still think and talk about it today because most of us feel it every day, just as people experienced it a few millennia ago. Although duhkha is often translated as “suffering,” the question of whether that’s the best translation is up for grabs. “The word duhkha has various shades of meaning such as suffering, pain, sorrow, trouble, difficulty, imperfection, impermanence, and emptiness,” says Marcy Braverman Goldstein , PhD, Sanskrit scholar and visiting assistant professor at Davidson College. “All yogis understand that duhkha is a problem, and yoga traditions throughout history have described practices that liberate disciplined people from duhkha.”

Goldstein points out that the Buddha taught the Four Noble Truths, the first one being that duhkha is just a fundamental part of life. “The Buddha broke it down into three categories: 1) ordinary physical and mental suffering such as sickness or not getting what you want; 2) suffering produced by change such as chasing after happiness even as it is fleeting; 3) suffering produced by the ever-changing conditioned states of an ‘individual’ or ‘I whose permanent essence does not exist.” So duhkha covers the gamut from literal, physical suffering to abstract, existential suffering – in other words, the plight of being human.

But this definition of duhkha-as-suffering still isn’t complete. And the derivation of the word speaks to that: “The etymology of duhkha reveals its meaning in a different way,” says Braverman. ‘”Du?’ (bad) + ‘kha’ (axle-hole) means ‘having a bad axle-hole. Having a chariot with a bad axle-hole (nowadays a car with a flat tire) is suffering.”

That’s definitely partly true, but duhkha might be thought of more simply as a “bad fit”, says Cora Wen, founder and director of Yoga Bloom. “Duhkha is almost always translated as suffering and something to avoid,” she says. “But it’s more like uneasiness, or discomfort. Duhkha is not something that we can really get rid of, it’s something that resides within us, always. Even when you’re happy, it can still be there.” So the idea that finding happiness is like climbing a mountain is erroneous, she says – sure, there are things we can do, like yoga, meditation, or going to talk therapy, that help us learn to sit with the basic unease of being human. But it’s more a matter of managing duhkha than getting away from it. In other words, “there are things we do can make it weigh more or less,” says Wen.

Wen points out that the flipside of duhkha is “sukha,” which means pleasure or ease – or more accurately, a “good axle-hole,” or a “good fit.” To illustrate the duhkha-sukha relationship, she recalls a time after she first started doing yoga when she was so taken with it that she practiced for six hours a day. In fact, she was so into it that when she “had” to go home for Thanksgiving one year, she was annoyed at having to stop her practice for those few days. “I was pissy,” she says, “because I thought it was duhkha to be with my family and stop my practice.” But it later turned out to be her last Thanksgiving with her mother, who passed away before the next Thanksgiving; it was then that Wen realized her perspective was what was the problem. “That Thanksgiving could have been sukah,” she says, “but I didn’t see it that way at the time. The suffering was all in my mind.”

So sometimes the suffering just comes from the ennui and the strangeness of being human. Sometimes the suffering is “realer,” and comes from painful life experiences, like the loss of a loved one or an illness.  But even in these cases, the goal is to learn how to sit with it, or even better, detach from it so that you can see it for what it is. Knowing that the “suffering” or the unease of simply existing is a part of life – and that the truly bad times will pass – is one of the major goals of yoga.

And sometimes you just have to laugh. “When we say that life is suffering we sound like really unhappy yogis,” says Wen. “But it’s a part of life. But if I accept that life will change – not might change, but will change, then it gets a little easier. Sweetness and sorrow are like two sides of a coin. You can’t stay in sorrow always, just like you can’t stay in sweetness always. It’s like the quote by Aubrey Menen,” Wen adds. “’There are three things which are real. God, human folly, and laughter. Since the first two pass our comprehension, we must do what we can with the third.’”