The Language of Yoga: Mantra 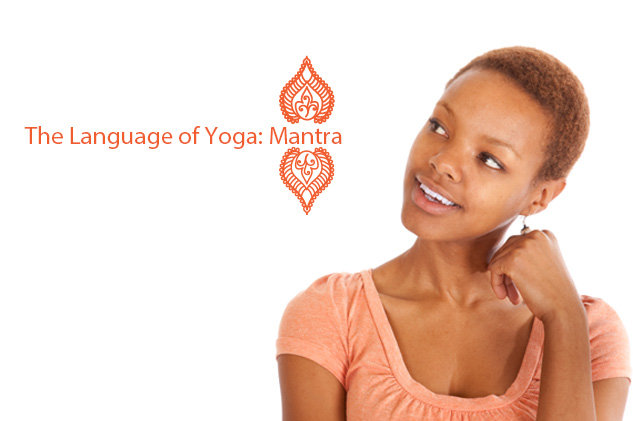 Mantra is a central part of yoga practice for a lot of people today, and it’s certainly one of the oldest. Like other forms of meditation, mantra serves as a way to focus the mind and to bring attention back to a particular point when it wanders off – in this case, to a repeated syllable or phrase. YogaGlo teacher Kia Miller, who devotes much of her practice and teachings to mantra, says that in millennia past, a guru would have given his student a mantra – it would never be spoken aloud and it would be with him for life. Now, of course, it’s a completely personal choice, and you can settle on whatever speaks to you most strongly. “Mantra is very personal,” she says. “When you find a mantra that resonates with you, enjoy it.”

The word originally comes from the Sanskrit root “man,” which means “to think,” and “tra,” which indicates instrumentality. So Mantra means “an instrument for thought” or more specifically, “thought expressed by sound.” Miller points out that “Mantras in their truest forms were said to literally come from the mouths of those who have reached an enlightened state… They were spoken by people in deep states of awakened consciousness.” Some mantras were passed down, preserved over time, and are still used today. There are of course many contemporary ones as well – and you can always invent your own, depending on what you wish it to convey. “There are all different types,” says Miller. “Mantras that heal, protect, activate, or help us move through blocks.”

So how does mantra actually work? There are several different levels at which repeated words can affect us. The first, says Miller, is the “pure level of the sound vibration. The ancient yogis understood that everything in the universe is vibrating; mantra is our way to vibrate with the universe.” One of the simplest and most common mantras is “om.” It’s said to be the first or primordial sound of the universe, and repeating the syllable can help us feel connected to its infiniteness.

Miller also stresses the psychological levels at which mantras may work: “There’s the level of intention,” she says, “since the words hold certain meaning… They express the truth of the intention.” In other words, just repeating an intention can help it take hold in your mind, and make it a reality in your life. Mantra may also work to “re-pattern” the brain, says Miller, as the repetition seems to affect certain aspects of brain function through the endocrine (hormone) system.

Finally, mantra can be a powerful way to shift your attention. “People have always used mantra as a way to concentrate – mantras can be used externally (spoken aloud) or internally (silently).” The highest form, she says, is ajapa japa, in which mantra has been practiced enough that it becomes a constant state. Over time, the mantra becomes completely effortless and reflexive. “It’s as if the inner ‘radio station’ in your head is now the mantra,” says Miller, “instead of the anxiety jargon that’s so often going around in our heads. Mantra can become so ingrained that it’s just what’s playing.”

Miller hits on the important point that all of our thoughts and ruminations – all those things we repeat in our heads all day long – have the exact same power over us that mantra does. Except that most of our go-to thought patterns are incredibly negative, and often fear-based, rather than affirming. “In a sense,” says Miller, “we’re always playing mantras in our heads. ‘Oh, I’m too fat.’ That’s a classic one. What are the mantras that you’re repeating?” Letting go of the refrains in your head that are not serving you well, and are in fact just leading to more anxiety and worry, is a pretty good reason to experiment with mantras. If you’re going to have something playing in your head, it may as well be something positive. And the ultimate goal might also be for those words to arise without you even asking them to, and before those negative thought cycles even have a chance to surface.

“I think when we start to get conscious of it, and work with and rewrite our inner language, then we can reverse that inner loop of thinking,” says Miller. “Then it gets very personal, and very powerful.”

As far as how to integrate it into your practice/s, that’s totally up to you. Some people might start the day with mantra, and then move into asana, or vice versa. Or you might practice mindfulness meditation in the morning and mantra at night. Miller says she often starts with a mantra first thing in the morning, since it’s a perfect way for her to jump into the day. “Like today,” she tells me, “I woke up even earlier than usual, and found that one particular mantra was just calling me out of bed. And it worked – I got out of my nice warm bed – that’s how powerful it was!”

Have you tried mantra meditation? What has your experience been like?