The Language of Yoga: Kriya 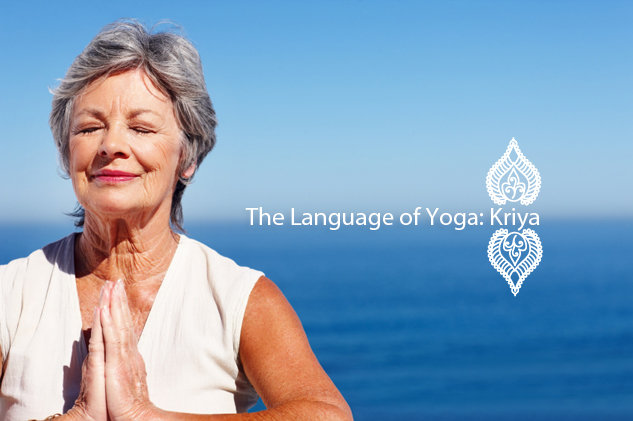 If you’ve been practicing yoga for a while, you may have discovered that you feel incredibly clear and grounded directly after class. You’ve probably also noticed that the hard part is transferring that clarity back to real life. That’s the common challenge of yoga, but it’s also the exactly the point of it: To apply what you learn in the practice to every corner of your life. And this is where the concept of kriya comes in. The word itself means “action,” and it overlaps in many ways with the concept of karma. But the practice of kriya-yoga is much larger, and it’s actually a way of putting yoga into action in our lives. “It’s really where the rubber meets the road,” says Jivana Heyman, the Director of the Integral Yoga Institute of San Francisco and co-owner of the Santa Barbara Yoga Center. “You find that you can actually practice yoga all day long.”

There are three elements to kriya-yoga: Tapas, Svadhyaya, and Isvara Pranidhana. You might recognize these concepts as part of the second limb of yoga, the niyamas, which are outlined by Patanjali in the Yoga Sutras. “In Book II of the Sutras, Patanjali is giving us this way of practicing yoga in life,” says Heyman, “while you’re actually living.” Because the three elements are so essential and therapeutic, they’re worth talking about again in this context.

Tapas is generally translated as burning. But it’s really about the discipline of a practice like asana or meditation, which gets us into a state where change can happen. The idea is that with the discipline, we’re forced to work through the source of unhappiness or pain – and it’s “burned” away though the practice. “Tapas is about accepting pain,” says Heyman. “That it’s something we can learn from, instead of just avoid. In Western yoga, we tend to just skip over that. But one reason that kriya-yoga is so important is that it gives meaning to pain. People who have a lot of pain often feel victimized – that’s a very weakened position to be in. To no longer be the victim is completely empowering. Patanjali is saying that pain is for your growth – not in a masochistic way – but that it’s a path to self-realization, and to greater peace. That the pain is actually showing you the direction you need to go in order to grow.”

So that’s tapas, which is a necessary part of working through pain – but it’s not all there is to it. The second element of kriya-yoga, svadhyaya, is about reflecting and introspecting into the nature of your unhappiness. For example, says Heyman, “You have to ask, why is this painful to my mind? What does it mean about the way my mind works and about my attachments?” Heyman points out that most psychological pain exists because we get attached to a thing – an opinion, our own reputation, or even to a person – and identify with it so strongly that when it’s threatened, it hurts. “We feel pain because the ego doesn’t want to be challenged. Often we go to addiction to avoid the pain. But yoga is all about trying to move beyond the ego – so pain is kind of like a gift in that it shows us where the ego is attached.” Of course, it’s not easy to see pain as a gift; it takes a lot of practice to view it that way, and then a lot of chutzpah to introspect enough to understand it. Sometimes you can do it alone, and sometimes you’ll need others to help you work through it – a circle of friends, fellow yogis, or even a psychologist.

Finally, the third element, isvara pranidhanam, is about surrendering to something beyond our own minds. We often think of it as giving in to, or being awed by, an outside thing – like god, the universe, or nature. But, as Heyman points out, “It’s letting go of the mind to something greater – but it’s not necessarily outside yourself. It can be inside yourself, too. After all, in yoga our essence is divine, and it’s all about connecting to the truth within. Like Patanjali says, ‘Once you quiet the mind, the true self abides in its own nature.’” Though it might be the ultimate goal to surrender to that within, it’s often easier to find that overwhelming experience of isvara pranidhanam while gazing out at the ocean, or up at a starry sky.

So these are the tenets of kriya-yoga. Putting them into action is one way to put yoga into action off the mat. But as Heyman points out, carrying out these three practices is not as simple as it sounds. “Of course, it’s not easy – am I making it sound like it’s easy? Sorry! It’s not. It takes a supportive community, a lot of practice.” He leaves on an interesting note, mentioning what his teacher, Swami Satchidananda, once said to him. “’Life is a lot like holding a hot pot in your bare hands…. It hurts! Yoga is realizing that you can let go of the pot.’ We’re holding on so hard to our ideas about ourselves, and holding on to the pain. But when we can learn to let go, even though letting go isn’t so easy, it gets better.”