The Language of Yoga: Kirtan 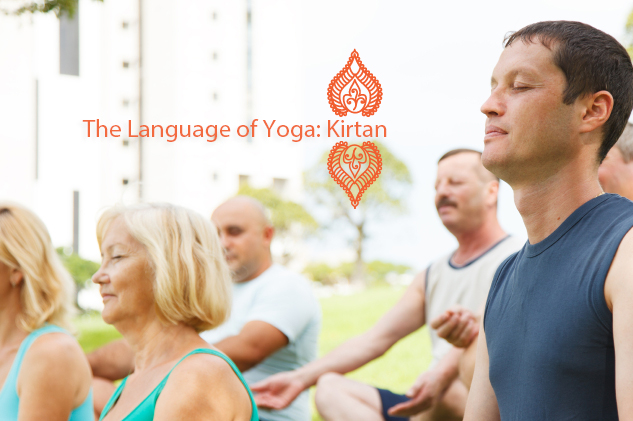 Even if you’re not completely familiar with kirtan – the “yoga music” genre that’s often devotional in nature – you’ve probably heard it in passing, perhaps at a yoga studio or online. Though chanting and mantra go back a few thousand years, kirtan itself is a little more modern, dating only back to the 15th century or so. It was originally a way of expressing devotion to the deities, and even today it can have this element. But it doesn’t have to. Some people, like Dave Stringer, a well-known kirtan singer, use it for other purposes: Mainly, as a powerful (and beautiful) way to bring people together, to transform consciousness, and to access that feeling of universal awareness that yoga itself can bring about. In this way, says Stringer, it’s more about a psychological and neurological transformation than a religious one.

Stringer points out that that kirtan was largely an invention of the Bhaktis, “a joyously rebellious movement, that took the music out of the temples and into the streets. They felt that if yoga is all about accessing a space of unitary consciousness, then there’s no meaningful distinction to be made between sacred and profane, or between temple and street.” So they made up simple songs and dances to convey to everyday folks what yoga was all about, or what another state of consciousness might feel like. “Music can be the fastest way to get there,” says Stringer. “It’s giving people the experience of what the state is – you get a taste of it, and that sticks with you. It’s way more efficient than lectures on yoga philosophy. Even for moment, if you slip the bounds of your limited sense of self, through music, dance…. that always remains.”

So kirtan was a tool to give everyman a taste of yoga, which otherwise would have been reserved for the upper castes. It only made its way over to the west in the last century, and it’s just been in the last 50 years or so that it’s really gained momentum. Today it’s fairly popular in the U.S., and different styles of kirtan that would have never intermingled, says Stringer, are doing just that. And fusing other styles of music with kirtan has made it even richer and more engaging.

Kirtan is a call-and-response style of mantra chanting, which makes it even more audience-participatory than other styles of music, says Stringer. He adds that what amazes him about the experience is how “consciousness-transformative” it can be. “We’re not doing it only to feel good, but to connect with others and enter into an experience of timeless, ecstatic awareness. Kirtan always involves the audience’s response – even though music always engages the audience, the audience in kirtan is always really part of the music. It blurs the separation between audience and performer.”

It also blurs the separation between audience member and audience member. The pieces usually start slowly and steadily, and gain speed and energy over time – they can be fairly long, and the build-up is part of the key to its effect. By the end, you can feel completely connected not only to the music, but even more to the people around you, which again gets to that experience of unitary consciousness.

Stringer says that another part of what asana and kirtan have in common is that they “both involve awareness of breath. With asana and kirtan we’re getting everyone to breathe together in unison. And we’re modifying the breath. You can feel the effects on the mind and nervous system. When you slow your breathing down, you begin to affect your autonomic nervous system – the parasympathetic system calms the body down.” In other words, the music can cue those same body systems that asana and pranayama do – they turn off the stress response and turn on the relaxation response. But, as the music builds in speed, it also incites a kind of energy, “giving the chanter an experience of a kind of weightlessness, completely relaxed and at the same time totally present and aware,” says Stringer.

The other part of kirtan, like yoga, is more cognitive. By concentrating on something – here music, rather than an object or the breath – you’re shifting your attention from the chatter that’s typically looping in your mind (at least for many of us) to something else. Taking your awareness out of your self and toward something other is perhaps the most essential part of yoga.

“One essential thing that yoga philosophy is saying,” says Stringer, “is that you and the world exist in state of interconnection. The more you inquire about the nature of things, the more the distinctions break down. The practices of yoga are designed not only to have you examine that, but to give you the experience of the breaking down.” And that’s exactly what one can experience in a live kirtan concert. “With kirtan we’re trying to lead people to the experience of it. It’s not even necessary to be completely immersed in it. Even a partial experience can have tremendous therapeutic value.”

As lots of people have said before, whatever works for you – asana, mantra, meditation, pranayama – do it. For most people, it will be a combination of practices, just as it’s been for thousands of years.

“The yogic texts talk about the experience of being Pure Awareness – not being bound by the body,” says Stringer. “It’s actually the illusory aspect of the world that things are separate. But when you experience yoga, you realize that the connection is what’s real, and the separateness is what is unreal. Kirtan, asana, and meditation are all practices designed to heighten awareness and deepen compassion. “They all affect the mind, the brain, and our emotional and nervous systems – and they were all developed long before we knew anything about neuroscience.”