The Language of Yoga: Prana 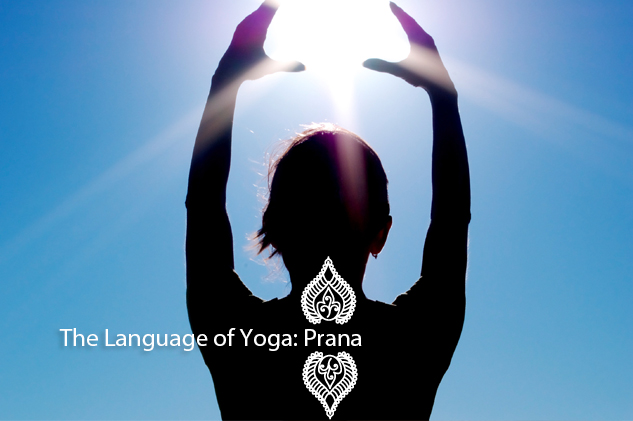 Most of us have heard the word “prana” somewhere along the road: Yoga teachers might mention it in reference to a person’s energy or their breath – or both. In fact, prana has elements of both energy and breath, as the two are intimately linked. Classically, it’s thought of as being the life-force that sustains us all, the energy that’s present in all forms of matter. Whether you think of prana as a physical entity within our bodies, or more generally as a metaphor to describe the underlying energy in everything – perhaps even in the universe itself – is up to you. Defining prana is difficult – feeling it is much simpler.

Prana comes from the prefix “pra,” and the root word, “an,” which means to breathe. The word translates as “to breathe forth,” or often even more simply, “life.” Jillian Pransky, director of Restorative Therapeutic Yoga teacher training for YogaWorks, and a founding Director of Bright Spirit Yoga Trainings, says that the concept goes back thousands of years, to the ancient writings known as the Vedas. Pransky describes prana as being “the sum total of energy that is manifest in the universe; the ‘universal life force.’ In western science, the atom, of which matter and all life are comprised, is 99.999% empty space. From the yogic perspective, this space is not really empty but is filled with creative potential, the universal energy, Prana.”

It can be hard for Westerners to wrap our minds around prana being a physical entity, as it’s understood in Eastern thought. Researching it will lead you to wildly disparate fields: from yogic philosophy to psychology to molecular biology to particle physics. Pransky points out that though it may not be quantifiable – now – this doesn’t mean it won’t one day be. “While not measurable by western scientific instruments,” she says, “yogis and most Eastern spiritual practices, agree that there is an energy, a life force, that, just like the breath – it is both within us, keeping us alive, and around us, pervading the environment and all of creation. Yogis believe that  ‘energy’ – also known as prana – is the universal life force that makes all our bodies systems work, our mental and emotional systems produce activity, and fully sustains our actual ‘aliveness.’”

Pransky says in her classes she sometimes has students do various exercises in which they rub their hands together very fast and then place them close together, but not touching. “They notice,” she says, “that when their eyes were closed they experience a sensation of heat, vibration, or energy. Some say it feels like they are pulling apart taffy; there is a magnetic force between their hands; a cushion between their hands; a heavy liquid barrier. Definitely something tangible is there. This is energy. Your prana. This is the part of you that walks in to a room before you do. This is the part of you that enters another persons space before your bodies touch.”

Prana, as Pransky points out, is also intimately linked to the breath, which she says is “both a major source of prana and serves as a vehicle for regulating the flow of prana throughout the body. For this reason the science of the breath is called pranayama, or the channeling or harnessing of prana.” Pranayama is the fourth limb of yoga, and allows us, at least to some degree, to control the mind. As many people have pointed out, it’s a lot easier to control the gross form (the breath) than the subtle one (the mind) – hence the study of pranayama.

Finally, there’s another, really fascinating way to look at prana: The ancient Yoga-V?sishtha describes prana as the “vibratory power” that underlies everything, animate and inanimate alike. Sri Swami Satchidananda in his commentary on the Yoga Sutras also describes it as the “basic vibration which always exists whether it is manifesting or not. It is never-ending…. We say that animate objects move while inanimate ones do not, because it appears that way to our eyes. We can’t see any motion in a stone, but that does not mean it is motionless. We need not go to the scriptures; the scientists themselves have proven that.” Indeed physics tells us that matter is made up of tiny vibrating particles – and even what appears to be empty space isn’t really empty at all.

Perhaps prana is simply another way of expressing the idea that there’s more to us than meets the eye – more to our bodies, minds, and even the “empty” space that makes up everything. In physics, it’s called string theory. In psychology, it’s known as gestalt, borne out by the phrase, “the whole is other than the sum of the parts.” What that other is and why it occurs is anybody’s guess. Though science can’t quite explain it all just yet, yogis were talking about the underlying vibration of things thousands of years ago and learning how to direct it. Most of us can feel that energy in ourselves if we look inward, and in the person sitting next to us if we look outward. And perhaps right now, that’s all we need to know.