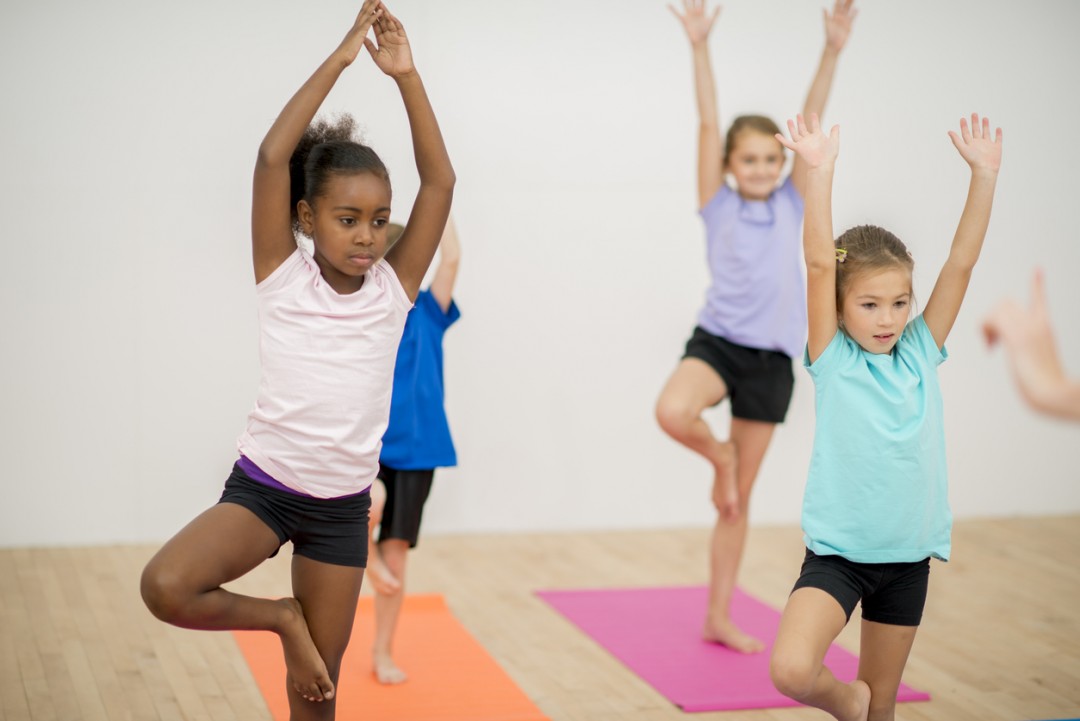 Adults who do yoga intuitively know the mental changes it can bring about – and of course, the science shows this more and more every day. Yoga for children is an obvious extension: We want our kids to grow up more balanced and more calm than we did, so it’s not uncommon for yogis of any level to teach yoga to their kids at home. And a burgeoning practice is yoga in schools – some school districts have implemented yoga or meditation into their daily schedules. And to good effect: The research is showing that yoga in the classroom has some measureable benefits for kids’ behavior and well-being, especially for those who may not be getting enough psychological or emotional support at home.

Here’s just one example: Researchers at Harvard and Yale, among other institutions, studied a yoga intervention called Yoga 4 Classrooms, which includes breathing exercises, physical exercises and postures, meditation techniques, and relaxation. Before and after the yoga treatment, the team measured the children’s cortisol levels, and had their teachers fill out questionnaires about their behavior and social-emotional skills. The kids, who were all second and third graders, also did a task that measured their attention.

After the yoga intervention, which included 30 minutes of yoga per week for 10 weeks, the average cortisol level of both grades of students decreased in response to the attention task. The second-graders had many improvements in their behavior; the third-graders also had improvements, but they weren’t as robust as the younger kids’. The average baseline cortisol level of the second-graders also decreased over the ten weeks, but it didn’t change in the third-graders. It’s not totally clear if this difference is a true age effect, or due to something else, so more research will be needed to suss it out further.

Other studies have found additional benefits of yoga in the classroom – like improved self-regulation, attention and working memory, and benefits in academic performance. The physical benefits of yoga are one thing, but the mental and emotional benefits are another. For kids, who come from all different backgrounds and levels of family support, teaching these skills in school can make a huge difference in their lives, as well as their behavior and experience at school.

“It goes without saying that emotionally and physically healthy kids who feel safe, supported and connected are happier and more successful in and out of school,” says Lisa Flynn, who founded Yoga 4 Classrooms. “A growing body of evidence is demonstrating yoga in schools promotes the development of social, emotional, and physical well-being of school children (and teachers) as it fosters a positive, compassionate school climate, all of which are key for effective teaching and learning.”

When kids are more centered and more attentive, this can open up the way for academic changes to occur. And it’s the potential for academic benefits that may initially prompt the schools to make the leap into offering yoga – but the fuller range of benefits will of course be there as well. “With social-emotional changes in place, we begin to see improvements in the areas of academic achievement, and decreases in behavior referrals,” says Flynn. “These are the areas that may be of most interest to school administrators who are just starting to explore yoga for their schools.”

More schools around the country seem to be experimenting with adding yoga and mindfulness practices to their curricula. And hopefully, once kids become experienced in them at school, they’ll bring what they’ve learned back to their families at home – if not overtly, then maybe just in how they react to their family members and deal with situations in their personal lives. Even that level of change in kids’ interactions with the world around them would be a great benefit of bringing yoga to schools.